Motto: «If you want a picture of the future imagine a boot stamping on a human face. Forever» (John.Orwell, 1984) 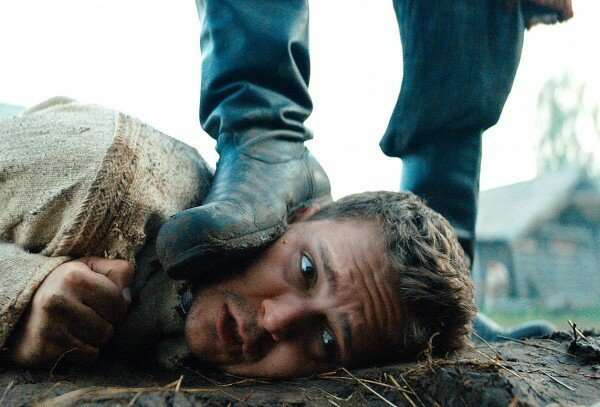 Today I went to the movies with «Slave». I, honestly, never wanted and never intended; at the time, in December, for me the trailer for this movie made the most repulsive. However, I had a fucking «Slave» the whole of January beat records at the box office 1 billion, 2 billion… Until finally, by the beginning of February, he not only exceeded the dues $ 3 billion, but worse, suddenly became the champion on fees for all history of domestic distribution, avoiding either the «move up», or «T34» then any other such nonsense. And it’s already brought this craft to a new sociological level. If the film, and it is in this year, tears up the box office and collects more than all for all history of Russia — then, he touches some important strings of people’s souls, that is, becomes a tool for social diagnosis.

Simply put: for the new year «Slave» loaded like a thermometer in the anus good of the Russian population — and when removed, it showed 3.2 billion rubles. It’s a FEVER. So I postponed his favorite Director Sam Mendes with his «1917», and a firm hand took the ticket to the «Slave». Sociology — first and foremost!

By the way, not only is the film actually still in theaters (the second month of the show!), but, even more curious — it is still the rushing people. I took a ticket for half an hour before the start of the session and had to settle for first row — the other was just some «marginalia». And what’s more — in the end, the hall was almost Packed. I couldn’t even, I love it decompose with his clothes on two seats — flopped the left and right, in the end was forced the whole movie to keep the jacket on my lap (they would so not go!)

Does it make sense to discuss the artistic merits of «Slave»? Unknown. Well this is about as about the beauty of the font, which marked the numbers on the scale of the device — still the most important thing to the right… But in fairness I will say that it’s not so bad like some honest criticism: the lead actor (some whether Serb, or Slovene Bikovich) is not so wooden as he was painted. That is, the actor he, of course, so-so, not the actor and not even the Petrov — but still emotions means, and some he has charisma. Then, removed all great, camera is live, sometimes right in your Lars von Trier, the picture is shaking everything up-to-date; acting is mostly nothing, Yes — but the script is not completely hopeless, not all the jokes are so stupid, some almost witty. Definitely a very bad Okhlobystin, but he has a mitigating circumstance: the movie for me it seemed that Okhlobystin is very embarrassing for their participation in this farce, so they double clamped and barking more than usual. That is, humanly speaking, for it is quite possible to understand and forgive… 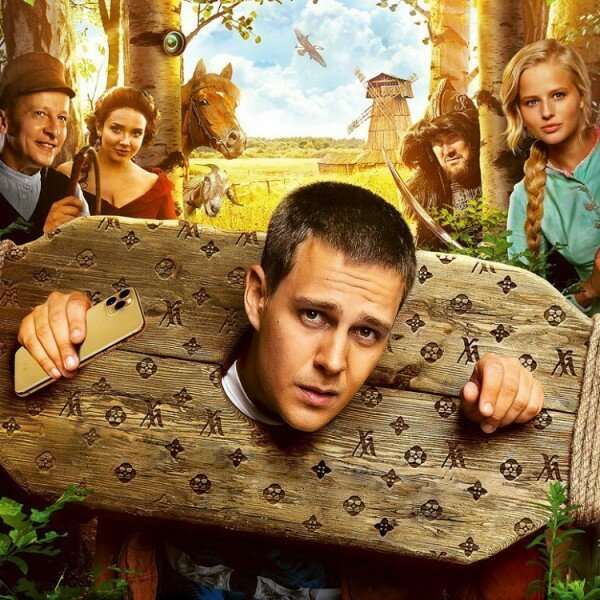 Simply in a nutshell to identify the plot and main idea of «Slave». They are: dissolved villain is kidnapped and placed in a special detention camp where he is forced to do hard physical labor, and for the slightest offense mercilessly beaten, abused, humiliated and subjected to torture (and for attempting to escape, not just threatened with death, but also portray his execution, only at the last moment, cancelling the sentence). In the result (!) this treatment, the ruffian becomes polite, considerate, pleasant person.

What about the people who actually came up with such a plot?

And those who avidly watching the performance with such a plot, then comes to watch again and urges you to look at their friends and relatives?

And those and other heavy sadomasochistic complex. And those and others it in itself is likely not even aware of — they «just» like to watch scenes of humiliation and beatings of other people… not directly, of course, that you. It is necessary to have some type of justification — that all «not seriously». Perfect excuse — «Comedy»! Man beaten with a whip, «with otagaki,» the major shot a police officer and he «broke his ass» (i.e. pelvis) — it’s the «Ah-ha-ha-ha» funny, it is like «pretend». In this sense, the creators of «Slave» was extremely successfully guessed the form of content delivery — «beating with a sense of humor». Exhausted S-M complex of people flocked to the theaters, as the dose of drug addicts to admire sadomasocism with an iron excuse: «we just wanted to laugh».

Archetypal — in the kondovy Russian folk sense — the basic idea of «Slave»: if a person is a lot of to beat and humiliate (in particular, to attack him with a boot to the face — slave is an appropriate frame) — this person will be GOOD. «A suffering soul is treated!» Yeah. Here is a very interesting to see — and, actually, what is «good» for movie makers and, apparently, the audience (once the spectator crowding on the film — so it seems like the changes in the hero, and he agrees with the methods of its «changes»?)

Someone would have said under the impression of «labor camps» that movie some hunveybinskaya happened. But it is not, of course. What have China? It is our, native homespun. This is the experience of Solovki of the Gulag, all Vavilov-Queen, collecting part of the fallen from malnutrition, part of the broken teeth in his pocket… You are now in any social networks write that «the Gulag camps were used for re-education». Well, Yes — and we can see which. Was the hero of Bykowicz major Jaguar that became a stable boy Grisha, he received 5 lashes, then another 20 lashes, a great number of man-handling, tidied up the horses dung — please become a man: quiet, polite, not rude, not rude.

«The only truly funny film in the Russian hire» (from the review in the media; photo illustrates the idea of the reviewer)

Little talking detail about our «Comedy»: at the beginning of the film the hero-villain, tried to escape, dragged to the gallows «for escape», air in the yard «the Russian landowner». On the gallows around two corpses (among them — one child), and next — on the way to the gallows — two or three men… impalement! At first I could not believe his eyes; but no — showed several times, though, and as casually — naturally, the men on the stake. In «Russia» «1860,»! Put «gentleman»!

Disturbances usually numerous «defenders of Russian antiquity» (any Cola in Russia 19th century? It’s not Turkey!) something not heard in entornetah — and it is clear the film because there are winks, there is supposedly «not real history», as it were, the imagination of a sick freak of a Director, played Okhlobystin… it is Clear that «fantasy», but the characteristic orientation of all these «phantasms»: s-m accentuation and pret…

Why do I say that the film is physically unpleasant? Yes, because if you look, it’s actually — by genre — dystopia. Rate at least a «universe «Slave» — the reality in which it develops all the action. It’s not just somehow, on the knee, hastily made «fortress village»; it is also a modern Russia, the Russia of the 21st century, in which «actually» occurs. What unites them by the village and as the true Moscow these days? Unites total absence of the concept of any rights, no RIGHTS. Here and there — the universe is arbitrary. Major Moscow can do absolutely anything with anyone — he hasn’t; and in the village the opposite — with the very major can do anything and anyone for it will be nothing. And if you have a little think about it, in both «universes» and the major is also absolutely powerless, because there is one God — the oligarch is very ugly, his father (actor A. Samoilenko). And this Oligarch is the Father of all layers of reality, absolutely have the power over life and death, not only dur-son, all that.

Another alarm for the specialist bell — virtually no sex. Violence is in many different forms, there is no sex. More than that — sex is ridiculed, the sex is as silly, vulgar and outdated. The only scene of relief in the film (Busty Aglaia asks him not to execute the hero) served in the most vulgar and reduced, and then the hero in disgust, refuses to have sex with her. Hero-major General stressed asexual and indifferent to «this case». Like it dirty, stupid, etc.

What is it? It’s not even GIMP — this is necrophilia in its purest form. Necrophiliac, as taught to us by grandpa Fromm, loves to inflict pain, I love to turn the living to the inanimate — and he hates sexbecause he loves death. Necrophilia is a further stage in the development of sadomasochism, far more dangerous…


A very ugly reality in the film because to watch me personally it was unpleasant. From such a reality and such a God I want to run away… But people like it apparently used to. «Mom, we are all seriously ill, mom, I know we’re all crazy,» when I have sung Choi.

UPD. By the way, the boot stamping on the face of the protagonist is almost certainly absolutely conscious reference of the Director to Orwell. Klim Shipenko — educated man, from a family of Soviet Director, in Los Angeles studied. Such is the rotten post-Soviet postmodern, «for those who understand». 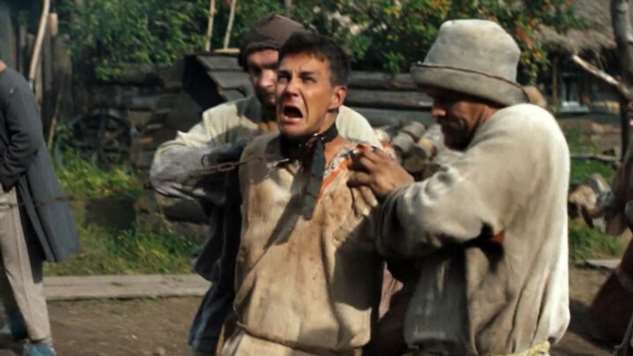 2020-02-17
Previous Post: What information about you can find scammers on the telephone?
Next Post: In the Urals the dead came the receipt for the garbage