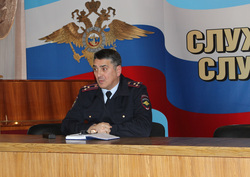 Roman Yarysh went from Yekaterinburg to PervouralskPhoto: UGIBDD on Sverdlovsk area
news from the plot

Reshuffles in the security agencies

In the leadership of the Sverdlovsk traffic police has been a serious reshuffle. The commander of a regiment of traffic police of Ekaterinburg, Colonel Roman Yarysh left the office.

2020-02-14
Previous Post: The deputies proposed to abolish the structure of the mayoralty of Chelyabinsk
Next Post: Former Russian Ambassador to Saudi Arabia explained why the diplomats receive threats