The United States will take years to deal with the consequences of failures in the development of hypersonic weapons, said the Deputy head of the joint chiefs of staff of the armed forces of the country General John Khayten. 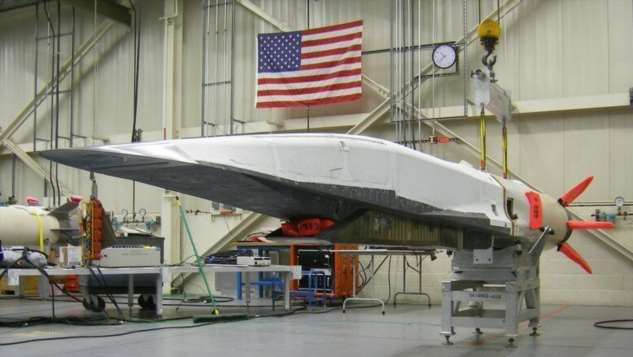 He noted that the United States «in the field of hypersonic seriously compete with a number of competitors in the world.» According to him, the US «was ahead 10 years ago.» Then they had «two programs, two prototypes», which «didn’t work very well». «What we did after they failed?» As stated Khayten, USA conducted «years of research the causes of failures and then canceled the program». The General acknowledged that the U.S. «will take years to rebuild». He urged to speed up the process.

In his opinion, the US is not yet possible to speed up a number of promising developments, even though the understanding behind the other powers, reports TASS.

«We need to learn to take risks,» said Khayten.

Something tells me that with the risk of the US all right.

Here’s five more frankly unsuccessful or did not achieve their purpose projects of the U.S. army, which was spent huge sums.

Useless radar to the missile defense system for 2.2 billion dollars 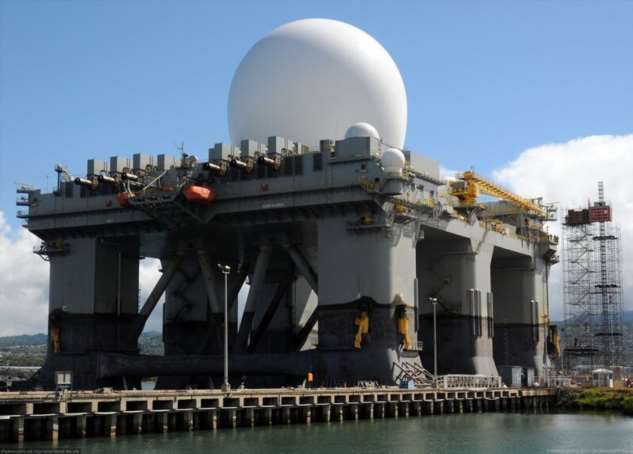 When you create a floating radar system SBX (Sea Based X-Band) cost $ 2.2 billion us missile defense Agency claimed that the product has no analogues. 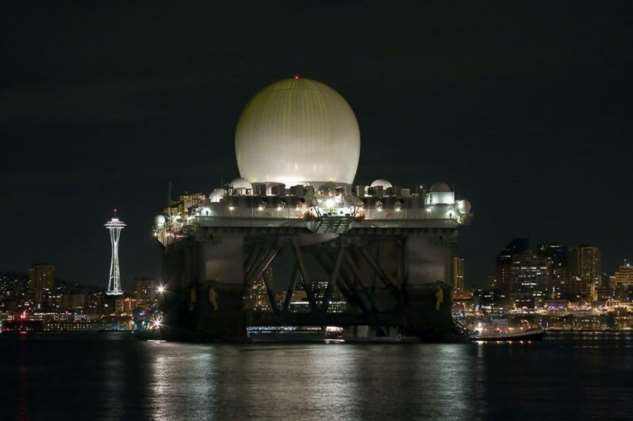 Radar was a self-propelled floating radar X-band height of 28 storey building. He was able to see even throw a baseball over San Francisco.

With such features SBX was easy to detect launches of missiles of ICBM «Topol-M» RS-24 «YARS» or SLBM «Bulava», track their course and to direct them interceptor missiles, as well as to help in the destruction of low-orbit satellites. This radar, according to developers, was able to differentiate real missiles from decoys.

The tests revealed a completely different picture: the sight of SBX was too small, and quickly set the radar in the attack — it is impossible. Also, the radar was useless against the ultra-low altitudes, mostly used by modern cruise missiles. In the end, the SBX since 2013 is practically always idle at pearl Harbor. 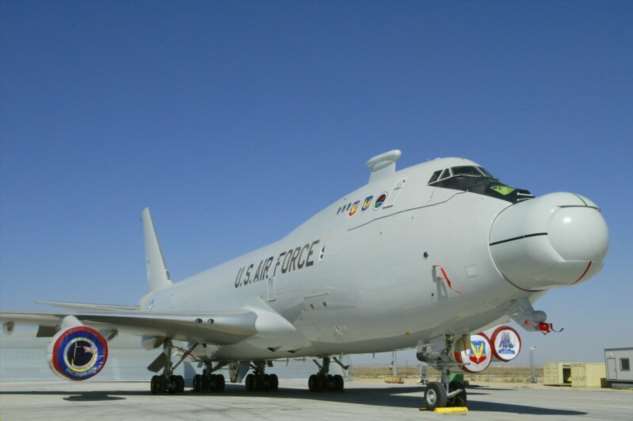 16 years of experience and more than 5 billion dollars was spent by the Pentagon to create military airborne laser. As the platform was selected , the aircraft Boeing 747-400 °F.

The idea was good: the radar tracks the aircraft or enemy missile, target coordinates are transmitted to the operator, and then 6 laser beams of the system are focused on the enemy object and create one powerful beam, which burns any flying target. 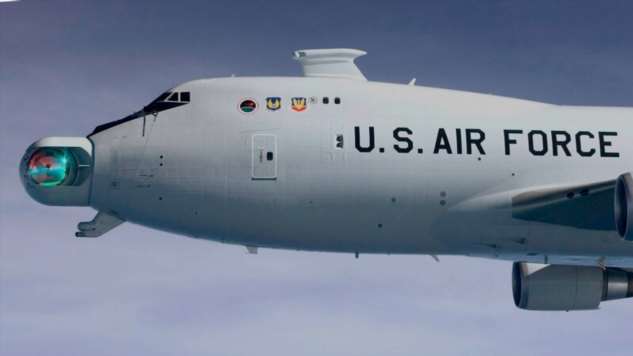 In practice, Americans have faced numerous difficulties in the atmosphere a considerable part of the beam is dissipated, causing needed laser big power and if the path of the beam will be cloud, neither of which the effectiveness of the lesions and speech can not be.

Therefore, the laser power was increased to MW, so in February 2010, the laser managed to destroy two ballistic missiles at the initial stage of the flight. Missile launch was carried out at intervals of one hour. It seems to be successful, but it turned out that the cost of the shot is incredibly large: the YAL-1 used the energy pumping on the basis of burning rocket fuel. The weight was enormous — she barely fit into the Boeing 747-400 °F. the Cost of one hour of flight of the aircraft was $ 92 million.

But the biggest drawback was the range of missiles is only 80 km And hit the target had it at the start, ie, being in enemy airspace, in which large airliner will not live long.

In the end, because of the high cost (the total cost amounted to 7 to 13 billion dollars) and relatively low combat effectiveness the project was abandoned. And he plane was sent to the platform 309 of the first group for the maintenance and repair of aerospace engineering (AMARG), more known as the graveyard of planes. 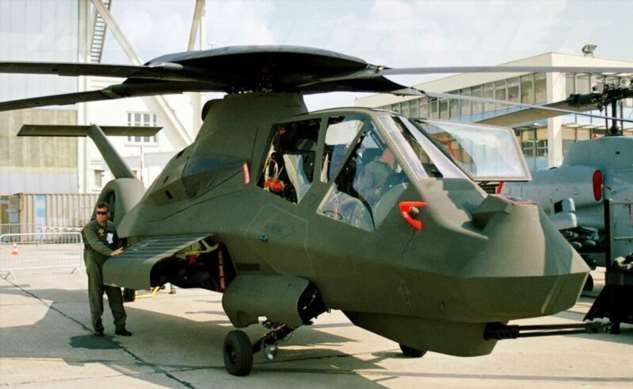 The idea to create a reconnaissance and attack helicopter stealth came to the Americans in the head in the 90-ies. The Pentagon did not skimp money on a new superweapon, and the work began. The development process was carried out a huge amount of experimental work and research. 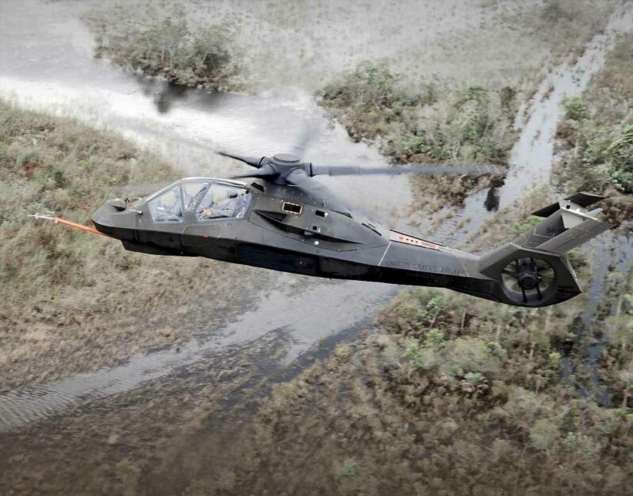 In the end, the designers of Boeing and Sikorsky was able to achieve impressive results. The effective area of scattering RAH-66 was only 1/600 of the EPR helicopters «Apache» and 1/200 EPR helicopter «Kiowa» and was less than than the missiles AGM-114 Hellfire.

Due to the integrated system of suppression of infrared radiation, the thermal radiation of the helicopter RAH-66 was four times less compared to helicopter an-64. 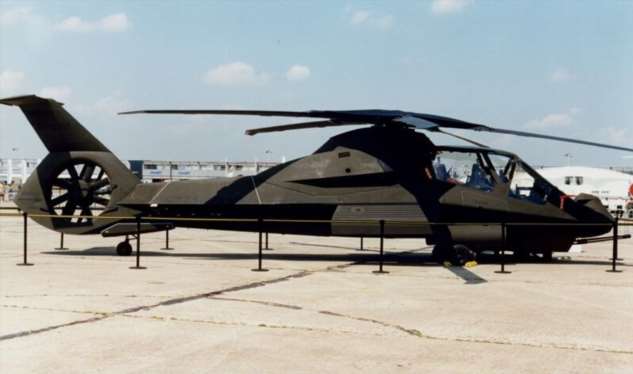 Also stealth Comanche had a high velocity of the order of 324 km/h. For all this, the helicopter had to pay the complete lack of armor. Lightweight Kevlar protection covered only the back of the pilot’s seat. After it was assembled and tested two prototypes, the military decided that a helicopter does not need them — it would be cheaper to use drones. Eventually building prototype 95-0001 «The DUKE» (the Duke) and the prototype 94-0327 went to the Museum, becoming one of the most expensive items.

In total, the program to develop the RAH-66 was spent around eight billion dollars, of which six in 1995-2004. Early closure of the project, Boeing and Sikorsky, who worked on the helicopter, received compensation in the amount of $ 700 million.


The combat system of the future: the failure price of 18.1 billion dollars 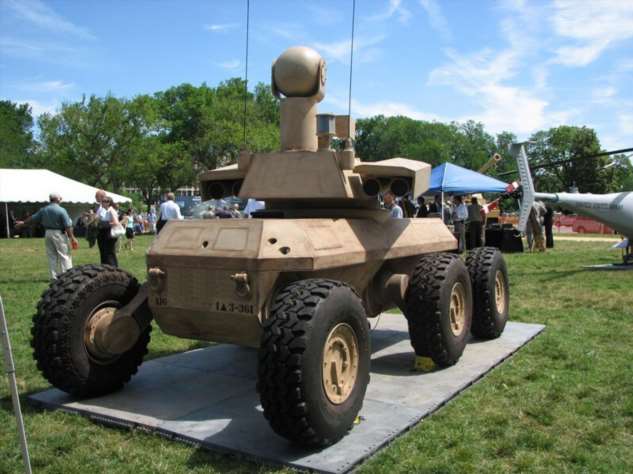 The us Future Combat Systems programme included a large-scale rearmament of the army with armored vehicles for the realization of the concept of network-centric military operations. In particular, were widely used unmanned and robotic tools. 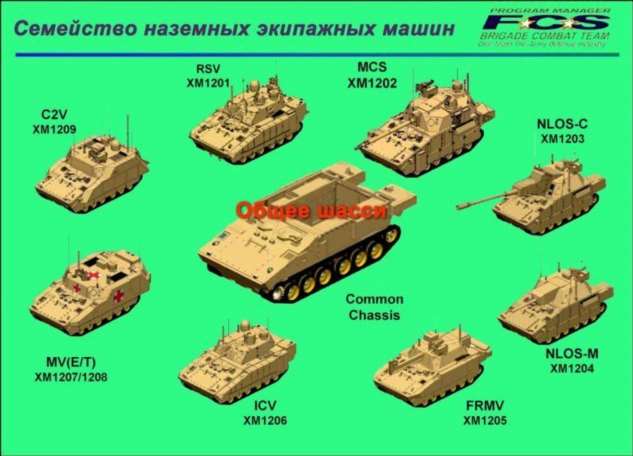 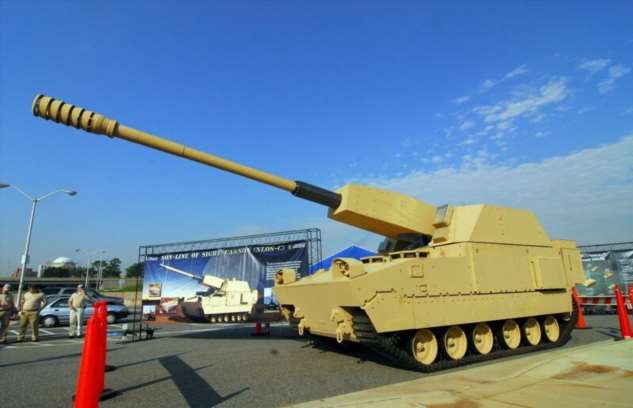 To the stage of embodiment the metal reached only a few, but the majority remained in the form of projects. The amount, which the program had to manage the budget was more than $ 300 billion. 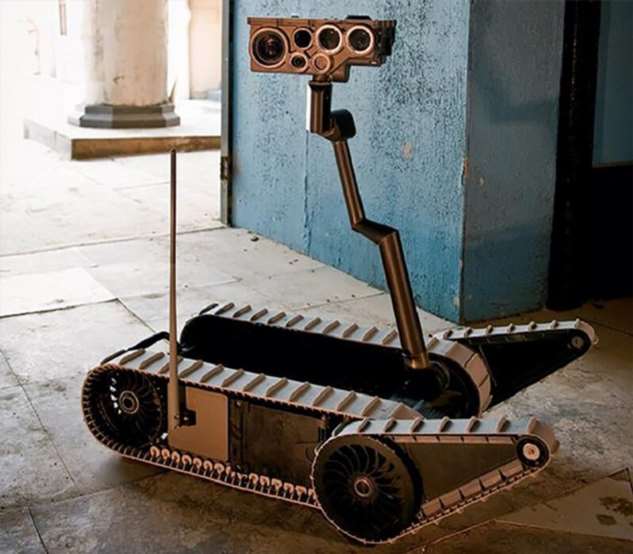 At the time of freezing Future Combat Systems contractors managed to learn only 18.1 bn And despite the fact that the U.S. armed forces received some advanced devices, such as the scout robots SUGV, the overall results of the program was recognized as a failure. 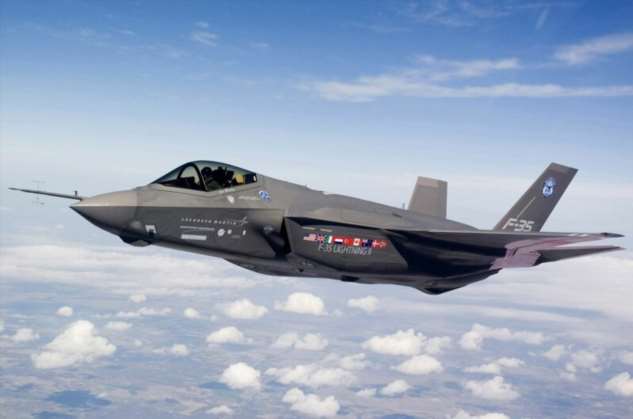 The development of fifth generation fighter F-35 Lightning II, which was conceived as a cheaper alternative to the F-22 Raptor, had spent more than $ 56 billion. But in this sum expenses on the fighter clearly won’t stop the plane constantly suffered from many design flaws. 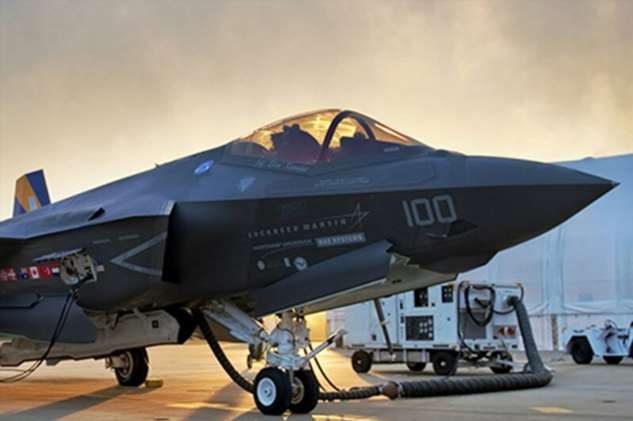 So, the aircraft tanks were vulnerable to lightning strikes, so to fly in stormy weather, the American fifth generation fighter is not recommended. As the refrigerant used in fighter jet fuel, which, becoming too hot, unable to cool the engine, then the aircraft can simply cease to function.

During the tests it turned out that the internal weapons bays of fighter is too small to accommodate eight managed aircraft small diameter bomb SDB II. Only Bay was able to put only four precision-guided bombs, but it turned out that this discharge may be accompanied by abnormal situations. 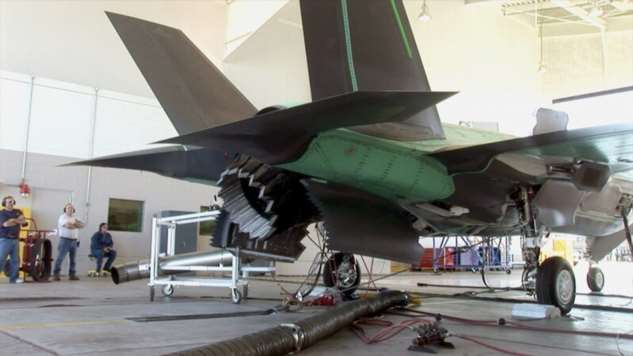 Engine newest F-35 Lightning II is recognized as unreliable by the auditors of the US government. Particularly serious problem in modification of the fighter to equip aircraft carriers, the F-35C, which demonstrated MTBF of 25 hours instead of the planned 120 hours, misleading the auditors.

For versions of the F-35 and F-35A, the figure was 47 and 90 hours, respectively. In the end, Congress approved the allocation of 17 billion U.S. dollars for the development and production of engines. 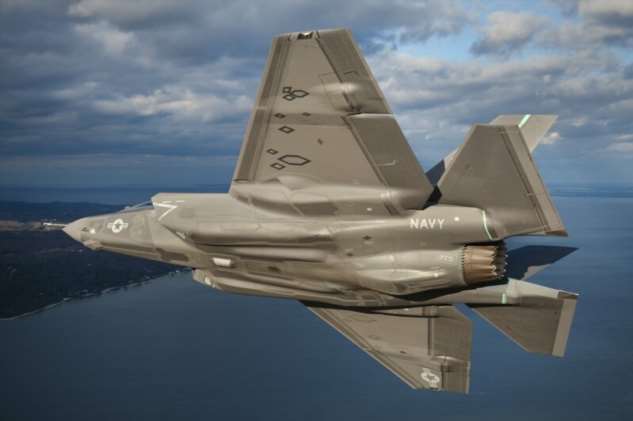 Turned out to be quite complex and software modifications to the F-35B, which contains more than eight million lines of code. It contained 243 different errors, 235 of which to date, has been fixed.

And this is only part of the troubles the F-35 Lightning II. The flight characteristics of the fighter was also not up to par. It turned out that American novelty unable to defeat in melee combat lightweight fighter F-16 made its first flight in the 70-ies.

In the end, the USAF have not found anything better how to develop a manual prescribing how pilots respond properly to the criticism of the aircraft.

In General, the project F-35 Lightning II can be called a failure: the designers failed to make an inexpensive fighter that would meet the requirements for aircraft fifth generation. The F-35 can’t fly at supersonic speed without afterburner, has no maneuverability, has a low thrust and relatively high ESR.

To save the Americans, too, failed: the estimated long-term cost of operating 2443 F-35 aircraft for 30 years in a RAID every fighter 8 000 hours, according to the analytical group at the Ministry of defense, will exceed $ 1 trillion. If you think that this notion of Russian Diwali experts, here’s another source with the same rating. The American edition The National Interest has compiled a list of the most disastrous high-tech weapons of the United States. It is noted that a total of five projects in Washington spent about $30 billion.

The first failed development called homing combat element BAT (Brilliant Anti-Tank Munition), which was developed during the cold war for the M270 artillery system. As planned, one missile could destroy a whole company of tanks. However, with the end of the cold war the project was delayed, and later completely abolished. It in total took $2.2 billion.

Followed by reconnaissance and combat helicopter RAH-66 Comanche, which took its first flight in 1996. In the end, the work on the helicopter had stopped in 2004 because of the high cost. The amount of investment amounted to $7.9 billion.

Then in the ranking is 155-millimeter self-propelled howitzer Crusader. This machine was capable of producing up to ten rounds per minute with a range of over 40 km. the Project was canceled in 2002 because the howitzer was too heavy (43 tons), and costs amounted to $2.2 billion.

On the fourth line edition put program Future Combat Systems (FCS). System had to completely re-equip the us army. As a result, one project based on a common tracked chassis cost the US $18.1 billion, after which the program turned.

Latest in the list is the program GCV (Ground Combat Vehicles). The basis of the project was to be a new modern battle tank. However, the result is a combat vehicle weighing 60 tons, She was not satisfied with the military, and the losses of the budget amounted to more than $1 billion.

2020-01-25
Previous Post: The man has built his wife a house in the shape of an airplane because she loves to travel
Next Post: Why weight weights for exercises from 16 to 32 kg