In the eighties in our country, work began on the development of advanced tank guns of increased calibre, capable of providing a dramatic increase in firepower. Were studied the concept of caliber guns 130, 140 and 152 mm in different species. All projects involved the construction of a 152-mm systems. 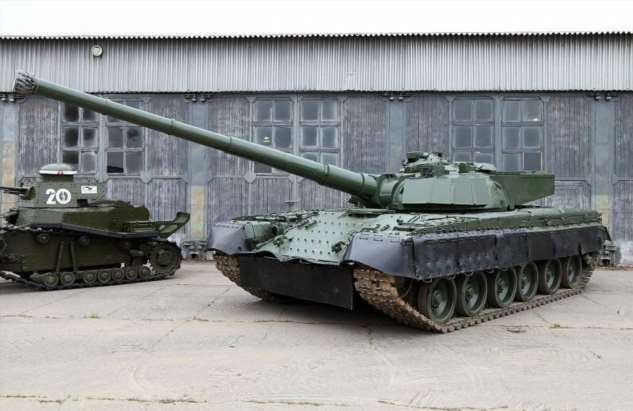 In just a few years was created and new guns and tanks for them. The latter had a number of characteristic features due to characteristics of weapons.Experienced «Object 292» with a gun LP-83. Photo Vitalykuzmin.net

One of the first developments of a new class were smoothbore 152mm cannon LP-83, which is the result of collaboration with a number of domestic enterprises. Initially, it was planned to test on the stand, and then were asked to inspect the prototype tank. The latter is a deeply modernized T-80BV and is known under the name «Object 292».

All the characteristics of the tank «292» were concentrated in the fighting compartment, and was associated mainly with the increased size of guns and ammunition. First, change the design of the tower. In the frontal part there was a breach of the new design in which the gun mount itself was brought forward. Stern added a large box-shaped niche. Also in need of serious revision turret – in fact, the creation of a design corresponding to high loads.

For LP-83 and the «Object 292» developed a new recoil device with increased efficiency. With their help the size of the rollback managed to keep the level settings of the serial of the guns 2A46. The momentum of the shot LP-83 was about one and a half times higher. For the tank «292» the development of a new loading mechanism under dual core 152 mm shots. With the development of the project, planned to move in the mechanized stowage of all ammunition.

In 1990-91 experienced the «Object 292» was released on the range to test fire qualities. Cannon LP-83 showed all its possibilities and advantages over systems of smaller caliber. Parallel to their positive qualities demonstrated a modified tank T-80BV. The design of the chassis and new towers bear the load and ensure the correct operation of the weapon.

One of the variants of MBT «Object 477». Figure Btvt.info

The tests confirmed the possibility in principle of modernization of the existing main tanks with the installation of new towers with weapons of high power. However, these ideas appeared in not the best time, and therefore did not reach full implementation.

In the eighties it was created another tank gun of high power, known under the index 2А73. Of great interest to this product showed of Kharkiv design Department on mechanical engineering, resulting in 152-mm guns were present in several of his later projects. However, none of them has progressed further tests.

The first version of the tank with a 152mm gun began to work in KMDB in 1984 it was «Object 477» or «boxer». Subsequently appeared the code «Hammer». Describes the basic features of such machine, in the future preterpevaet significant changes. At the same time as development of the project has constantly fine-tuned some components.

The project «477» provided made the installation of weapons under the cover of reduced dimensions. The crew and stowage were placed inside the case, and above them on a rotating base placed in the housing with the gun and loader. This arrangement of the fighting compartment was to provide maximum safety for people and ammunition. In addition, it is possible to reduce the required size of the tower and to reduce the weight of armored vehicles. 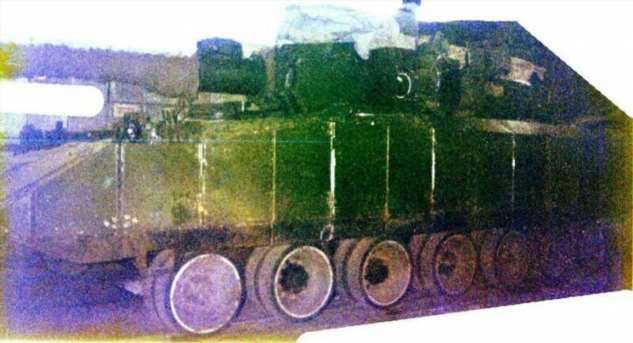 
Particularly challenging was the development of an automatic loader, capable of lifting components shots from the casing to the gun. AZ included two Transporter for storing and feeding projectiles and shell casings placed inside the case. Capacity – 32 shots. There were separate supplies conveyor 8 shots. Also had the lift for giving of shots in the chamber.

«Object 477» passed the test, but then the work stopped because of the collapse of the Soviet Union and characteristic problems. Subsequently, there have been unsuccessful attempts to revive the project. The altered versions of «the Boxer» / «the Hammer» was called «Barrier» and «Note». These projects use a similar but modified design solutions. Over time, all such work stopped.

In the nineties, their version of the tank with a 152 mm gun was developed by the Ural KB Transport engineering. MBT «Object 195» or T-95 was supposed to carry a smoothbore gun 2A83 high power. It was also suggested to Supplement the main gun 30-mm automatic cannon.

The project «195» lay a number of layout solutions aimed at increasing the safety of the crew. All tankers must be located within the housing and control arms using the remote control. Uninhabited combat compartment was performed according to the scheme made by placing weapons under the cover of reduced dimensions. 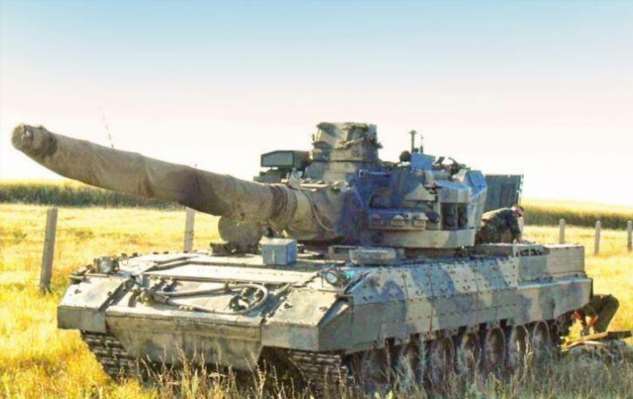 Unfortunately, the exact details of the tank design as a whole and its individual components are still missing. Nevertheless, it is clear that mechanized stowage of ammunition was located inside the case. With the help of conveyor and Elevator components of the shots had to go in a low profile tower to the gun. For all its complexity, is the fighting compartment provided high fighting qualities, increased human security, as well as giving some potential for modernization.


However, as the previous tanks with 152-mm guns, «Object 195» did not progress beyond the test. After a long period of uncertainty was abandoned in favor of a fundamentally new project. However, apparently some work on the «195» / T-95 is still found application in the creation of a more unified new armored platform.

The Mystery Of «Armata»

Since 2009, developed a new unified platform «Armata», which was already created promising MBT T-14. From the very beginning at the level of speculation and rumors have mentioned the possibility of equipping the T-14 instrument of larger calibre. Subsequently, there were reports according to which there really is a study of this option to «combat artillery car.» In different assessments in this context appears 2A83 gun or product based on it.

How it will look like the Armata with a 152mm gun – unknown. However, you can try to imagine such a vehicle, using the available data about the existing MBT T-14.

Shot of separate loading ammunition for the gun 2A83. Photo Naukatehnika.com

It is known that the T-14 is a desert fighting compartment with a tower custom design. Under light protection durable hides cover the gun installation, on which is mounted a gun 2A82. Thus, we are talking about some kind of layout with remote location of weapons. With the installation of 152-mm gun 2A83 can be used the same layout. It has some advantages, including easier processing equipment military offices under the new instrument.

But the exact details of the «Armata» with a weapon of high power are not yet available. Moreover, it remains unclear whether even the status of the project – unless, of course, he really developed. The conclusions of BAM on the basis of the MBT T-14 will only be possible after the emergence of sufficiently detailed data.

It is easy to see that in the creation of advanced tanks with 152-mm guns high-power Soviet and Russian engineers worked through various concepts and designs. While one of the layout options have not received special distribution, while the other has found application in several projects.

Tower of traditional design, rebuilt into a larger and more powerful gun was used only on the «Object 292». All other experimental samples were made weaponry, protected by a dome of smaller size. In a similar way can be constructed and the fighting compartment of a future modification of «Almaty was.» 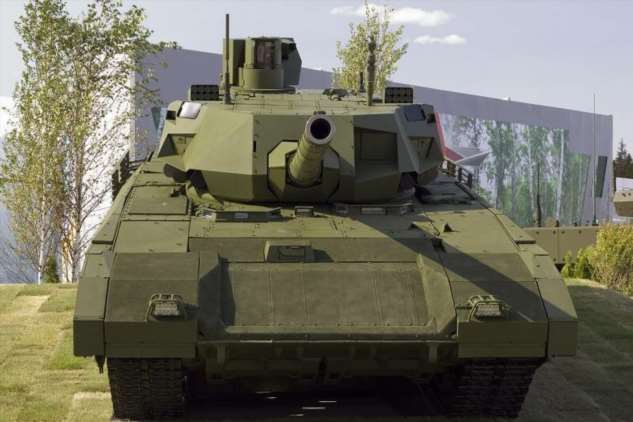 MBT T-14. The characteristic contours of the tower indicate the layout of the internal volumes and hinted at the possibility of replacing guns. Photo Wikimedia Commons

Made the instrument does not require large and heavy towers, and also allows you to move the place of the crew entirely inside the hulls. However, there is a need for more complex automatic loader and remote control systems of armament. In the case of uninhabited combat compartment requires a new chassis, as ready-to-use machine can lead to excessive difficulties.

Thus, if we are talking about the creation of the project of deep modernization, as in the case with the «Object 292», the most beneficial is the use of rebuilt towers. In the case of completely new tank justifies itself as much automation as possible or uninhabited combat compartment with issued weapons.

Positioning the available data, it is possible to imagine ways the future can go in the development of the domestic tank. However, such predictions are only valid in one case – if the customer take a serious interest in guns high-power and run the transition to a new caliber tank guns.

2020-01-20
Previous Post: Prince Harry and Meghan Markle officially depart from the Royal Affairs
Next Post: Hear to see: scientists have created a directory of memes for the blind